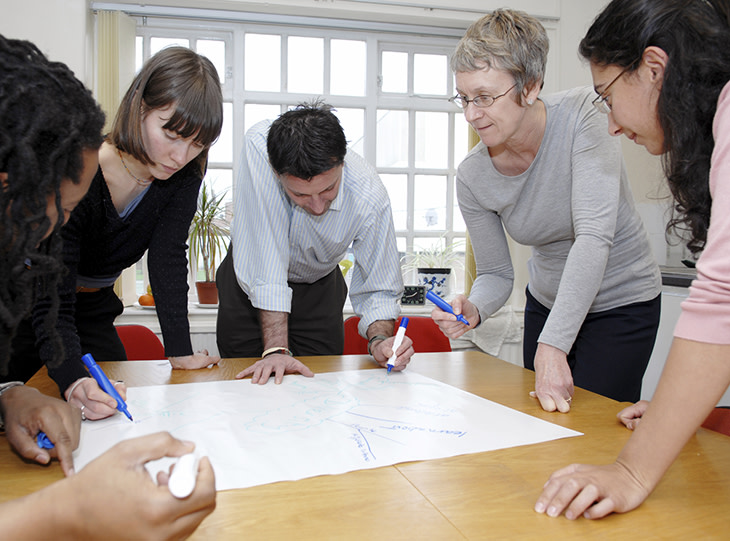 In the article “Interviews, focus groups and co-creation – which method is the right one?” the concept of “co-creation” was distinguished from the methods “qualitative interviews” and “focus group discussion”. In today’s article, the focus lies on “co-creation” as a method.

Definition and field of application

The method “co-creation” (also referred to as codesign, participatory design, generative method) is based on the assumption of an equal partnership between user and company for the period of a product or product development. The user is not only considered as “informant” but rather as “active employee”.

The possibilities of the participants to express themselves are limited in methods such as qualitative interviews or focus group discussions because of the language used and the individual frame of reference of the participants. The intention of co-creation is to create conditions in which aspects can occur that normally cannot be observed and verbalized. Co-creation emphasizes the collective and interactive negotiation and creation of something new.

The following aspects are important for a successful co-creation session:

“Doing” is an important part of co-creation: standing up, walking around, working with your hands – that are things that should be especially supported. According to that, the spaces need to be large and open. Enough areas to stick post-its, to put up (intermediate) results and to sketch ideas are necessary. In addition, it would be great if the spaces support working in smaller groups too and if there are enough surfaces to spread materials (paper, pencils, glue, pictures, photos, boards, etc.).

A big challenge is the definition of the right problem or question for the participants: participants could be unsettled by a question that is too open, but a problem definition that is too narrow leaves little room for creativity. It is one possibility to narrow down an open question with words or pictures that should be used, or with a structure (e.g. personas, scenarios) that should be completed. A typical task could be to create a collage with individual experiences using a current or prospective product.

In order to conduct a successful co-creation session, it is indispensable that the participants are comfortable, that they can build up confidence in the other participants and self-confidence. An appropriate period of time to warm-up is just as important as various exercises that do not ask too much of the participants but are fun. A common thread and the intention of every single task have to be obvious at every time so that the co-creation is not seen as ridiculous.

If a mere co-creation session seems too risky, the method can be used as a single, creative task within a focus group discussion. The advantage of this alternative is that, because of embedding it in a focus group discussion, there will be relevant results for the problem definition in any case and, even if there are no new results during co-creation, the session wouldn’t be conducted for nothing. If co-creation proves its worth, the method can lead to a more intensive variation, e.g. across multiple dates to a (concerning the project) long-lasting collaboration.

Having applied the co-creation method during various projects, the following best practices can be summarized:

A possibility to reach informative participants is to concentrate on the extremes (e.g. power user, users that are against a selected position). Then, however, the participants will not be representative.

Even if the solution for the task is not determined und moderation with regard to content is not required, one person is needed that takes the pencil and collects first results on the whiteboard – of course with the intent to pass the pencil and thereby the initiative back to the group as soon as possible.

In order to keep the group concentrated and active, time constraints are an important instrument. They should be well-considered beforehand.

An advantage of the co-creation approach are the tangible results that are developed in the users own language. Depending on the task, visual material is generated that could be used as an inspiration for designers and to ensure empathy for the user. The user is an active co-designer, user-centered ideas and innovations are possible.

The success of co-creation depends mainly on the recruited participants and the group dynamics between them. Furthermore, co-creation is not applicable in every company, because certain openness for such an innovative method and appreciation for the ideas of the participants is needed.

by Ireen Weise
User Research
←
back to the overview